Read before the Dental Society of the State of New York, Rochester, May 15, 1929. Yes it is old, but it is amazing to see that even in 1929 dentists found flaws with the traditional acid/bacterial theory of tooth decay.

Current (and false) theory as described by Dr. Bodecker DDS.

"The etiology of dental caries as taught today was first formulated by W.D. Miller. He showed that the bacterial fermentation of carbohydrate food particles remaining upon the teeth forms lactic acid, which attacks their mineral constitutents, while the organic basis substance is destroyed by another type of bacteria. Thus a cavity is formed in the tooth.
A further and important contribution was made by Bunting, who found that a certain type of bacteria, the Bacillus acidophilus, is always present during the decay of the teeth."

The current theory is wrong because bacteria play, at best, a secondary role in tooth decay. Also it is impossible to eliminate all the bacteria that are supposed to cause tooth decay. Notice that the main bacteria said to be the cause of tooth decay is none other than Bacillus acidophilus, the same stuff all over our digestive track and that is in yogurt. In other words, a good bacteria.

These investigators have felt that Miller's theory does not explain the disease in all its phases, as the following exceptions can be noted:

#1. Teeth do not always decay in the presence of food debris.

In other words, some people are immune to cavities even when there is food on their teeth.

#2. There appears to be an increase in susceptibility to dental decay during pregnancy and systemic illness.

In other words, it seems that there is a systemic condition causing cavities, rather than an influx in bacteria or acid.

#3. Pulpless teeth often seem to be more prone to decay than vital ones.

#4. The occurrence of approximal decay, affecting only one of the two adjacent teeth.

Bacteria don't strike evenly, but instead strike one or two teeth, ignoring the rest. Again implying a systemic condition that causes cavities.

#5. That mottled enamel, which appears to be poorly calcified, is not more susceptible to decay than normal enamel.

Because these exceptions occur, it suggests something is missing in the theory.

The life-work of the author has been to solve the problem of dental caries.

But very little attention has been given to the predisposing causes of caries. Irregularities, causing food to lodge easily between the teeth, may be a predisposing cause, but the principal one is to be sought in the tooth tissues themselves.

In 1905-1906, investigation of tooth enamel proves that it has an organic matrix. Dental "lymph" passes from the interior of the tooth to the mouth.

Conclusions: Even in the early 1900s, intelligent investigators believed that there must be more to tooth decay than just this idea that bacteria cause bad teeth. Of course I know this to be true, but now it is a matter of putting out the information in a detailed way so more people can see that they have been fooled about the relationship of bacteria to tooth decay. 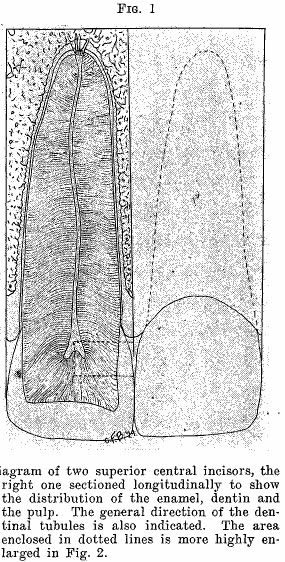 Dissection of tooth showing the small channels through which "dentinal fluid" flows. 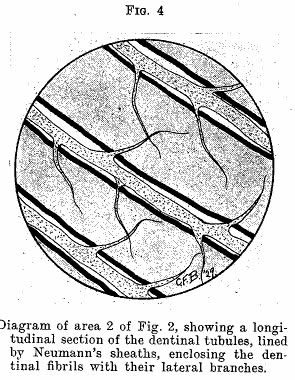 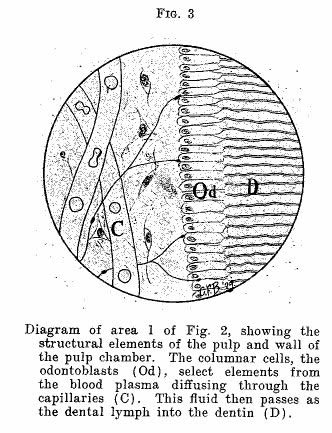 The practical advice in this book really seems to be reversing my tooth decay!!! Halleleuiah brother!!! I bought the book for $28... What a bargain, The dental work was going to cost well over $4,000.00 Think I'm excited, you will be too if you use this info to take tooth health into your own hands! Very satisfied. - Mike in Ashland, Oregon.

This book is a must read for everyone interested in improving their health. - Pam Killeen, NY Times bestselling author

I had several very painful cavities postpartum (after having twins) that kept me up all night in pain and made it so I could barely eat... After following the advice in this book accurately my tooth pain subsided within 24 hours and no longer hurt at all, my teeth also look nicer and my gums no longer bleed and are a nice pink color. - J. Steuernol, Canada

Fabulous book! I work in a health food store and will be recommending it a lot. - Vimala

I purchased your cure tooth decay book and appreciate all the info that has opened my eyes to this nutritional healing. - Ace

[Cure Tooth Decay] is a vehicle towards a higher good. It changes your perception of reality. It changes the reality. - Ranko Medved, Croatia