Years ago, when people were afflicted with various types of ailments and diseases, it was a common practice to blame evil spirits. The belief was that the evil spirit had invaded the person’s body and was causing the disease. If one could placate these spirits or induce them to leave then the disease would be cured.

People of the world still maintain this same belief today, except that these evil spirits now have a new name. Scientists, doctors, dentists, and government officials have decided that these new "evil spirits" are called micro-organisms (viruses, bacteria, etc.). The prevalent modern theory is that these viruses and bacteria are the basic or primary cause of disease.
This theory of disease, labeled the germ theory, became cemented in our minds due to the work of Louis Pasteur (1822-1895). 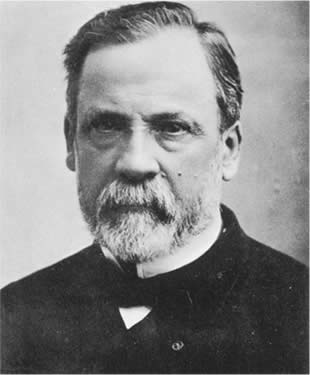 Mr. Pasteur proposed a theory of disease that is now the basis of most forms of modern medicine. This theory projects the idea that pathogenic bacteria exist outside the body and that when the body's defenses are lowered bacteria can invade the body and cause disease. Unfortunately, in our world, which is filled with a substantial amount of corruption and darkness, this "science" has remained the status quo without an adequate scientific debate. The effect of Mr. Pasteur's contribution to medical thought is what has led to our modern system of dental care.

Germs exists outside of us. They cause disease. Our body can protect itself against germs to a point. In order to eliminate the disease, we must eliminate the germs. The problem with this theory, in addition to the fact that it is difficult to eliminate germs since they are everywhere, is that it makes us fear the world around us, because the world might make us sick, and disease can strike at any moment.

Antoine Bechamp and other’s proposed another theory. Bacteria/life exist in a dormant state, and then change form based on their environment. They are not the cause of, but the result of, disease. They evolve and change to the environment.

The pleomorphic theory of tooth decay means that we are not victims to evil bacteria that invade our system. Rather that bacteria evolve and change with their environment. If bacteria change based upon their environment, then what controls the oral environment in which bacteria live?

The quality of the food that we eat.

I had several very painful cavities postpartum (after having twins) that kept me up all night in pain and made it so I could barely eat... After following the advice in this book accruately my tooth pain subsided within 24 hours and no longer hurt at all, my teeth also look nicer and my gums no longer bleed and are a nice pink color. -J. Steuernol, Canada

"The practical advice in this book really seems to be reversing my tooth decay!!! Hallelujah brother!!! The dentist wanted me to have two major root canals immediately and two other teeth filled. When I asked him if there was anything I could do with nutrition or supplements to get mu teeth to heal, he said "maybe you could slow the decay down a little bit" but that essentially the answer was no.

That dental visit was three mobnths ago and my teeth have stopped aching all together, are way less temperature sensitive, and feel generally stronger.

Most of us have been totally disempowered regarding the health of our teeth. This information has changed that for me. I bought the book for $28 anyway though. What a bargain, The dental work was going to cost well over $4000.00 no wonder dentists don't seem open to this stuff working! Talk about a biased perspective!!!

Think I'm excited, you will be too if you use this info to take tooth health into your own hands!"
Very satisfied, Mike - Ashland, OR

"Not only is Cure Tooth Decay a practical guide to teach parents how to raise healthy children (with healthy teeth), it is also a helpfull tool for adults who have suffered with poor dental health and/or chronic disease. I would also highly recommend this book to people who are looking for things they can do to protect their bones, and their overall health, as they age. In other words, this book is a must read for everyone interested in improving their health." Pam Killeen New York Times nestselling Author

"Ramiel, You (along with Weston Price) saved my teeth. Was supposed to get a root canal (which I had no money to pay for). Tooth was in pain. After three weeks on the diet I can feel a big difference, tooth doesn't hurt now and feels like it's healing. Thanks so much. Unbelievable!" - Leroy, Utah

My cavity has gotten smaller! Once you are set free from being a slave to modern foods of commerce author continues to explain how the ancient people ate. They were healthy, strong and good looking. They had no cavities. They had no illness until familiar western culture came to visit them. If you are reading this review I am sure you understnad something is not right in the world. That we are born to live under a certain hypnosis. That we are taught to give away our responsibility to "people with authority", and those people cannot even take care of themselves. I recommend this book if you want the way out."Ranko, Croatia