Dr. Meinig's research is based on Dr. Weston Price's 25 years of impeccable research. Dr. Price led a 60-man team of researchers whose findings rank right up there with the greatest medical discoveries of all time. What the research found about the endodontic procedure was that toxic substances and their related bacteria become entrenched inside the structure of root canaled teeth and end up causing the largest number of diseases ever traced to a single source.

What Root Canals Can Create Disease

When a dentist performs endodontic treatment to treat an abscess, the cause of the disease in the tooth is not addressed. When a tooth pulp is damaged from an infection, the reason is not just because there are bacteria near the tooth. The tooth is infected usually because the blood supply to the tooth is unhealthy. During a root canal procedure, the dentist does his best to clean out the inside of the tooth. But current cleaning procedures cannot reach inside the many miles of microscopic tubes in your tooth. Those tubes contain a variety of cells and tissues. Those tissues are already damaged or inflamed prior to a root canal procedure. But after a root canal procedure, those tissues die. As a result, this creates an anaerobic (oxygen deprived) environment which results in fermentation and finally purification. Over time, the decayed matter in a root canaled tooth can seep back into the bloodstream, contributing to, or even creating disease. Hiding this information from the public, is the "Root Canal Cover-Up" 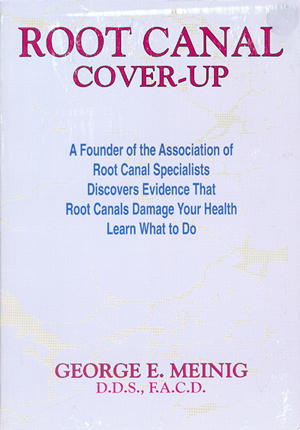 Root Canals can Contribute to Disease

Weston Price found many types of degenerative disease, like heart disease, kidney and bladder diseases, arthritis, rheumatism, mental diseases and lung problems in laboratory animals implanted with infected root canaled teeth - the same diseases that were in their human hosts. Dr. Price also found that a large percentage of patients recovered from their illnesses after the root filled teeth were extracted.

Dr. Price along with 60 of the nation's leading scientists, while working for the old American Dental Association, were convinced that root canaled teeth produced such systemic diseases as kidney and heart diseases, arthritis, pregnancy complications, endocarditis, and other systemic diseases.

Why The Root Canal Cover-Up?

Dr. Meinig had hoped that the American Association of Endodontists would take a serious look at Dr. Price's work and that they would then initiate research to discover how to kill the toxins in the dentin tubules and successfully treat tooth infections and problems with root canals. Dr. Meinig states that:

At present, they have failed to face these issues. However, numbers of independent-minded dentists have been using new and different approaches.

Instead of taking Dr. Meinig's concerns seriously, they were ignored. And the rate of root canals has continued to increase since then.

Ultrasound, lasers, colloidal silver, garlic, Enderlein sanum remedies, nutrition, the French calcium oxide treatment and prayer are among the topical approaches being investigated as alternative treatments to root canals, or treatments used to seal the tubules in the canal.

And now, the most effective approach ever towards preventing root canals: nutrition. Learn how to apply it.

I was ready to have a tooth pulled and the dentist told me that I needed a root canal, but I had no money for either procedure. I was in pain and my cheek had already begun to swell. But after just over a month of folliwng Ramiel's dietary protocls it is hard for me to feel which tooth was bothering me. Thanks a million to Ramiel Nagel for writing this book. Unbelievable! - Leroy, artist from Utah.